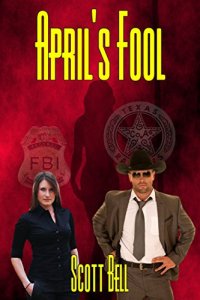 If it weren’t for bad luck, esteemed Texas Ranger, Sam Cable, wouldn’t have any luck at all. Cable wakes up next to controversial US Senate candidate April Marie Fortney. She’s dead. Trouble rolls downhill from there. All eyes are focused on Cable, who finds himself smack dab in the middle of a fervid racial divide, digging for clues to unearth the truth before it is too late. Desperately trying to keep his bacon out of the frying pan, Cable is forced to team up with plucky FBI agent Rita Goldman. A good dose of castor oil seems like a more palatable cure to Cable’s dilemma than entrusting his freedom to a rookie agent. April’s Fool is a tightly twisted tale spun with trademark wit and crisp storytelling. Author Scott Bell weaves an intricate plot, burning with 21st-century relevance, told through colorful, engaging characters.

Author Scott Bell is a friend of mine. I first met Scott at our monthly Writers Group critique group. He works hard at honing his craft. His writing is appealing and entertaining. His latest release, April’s Fool, is reminiscent of storytellers Lee Childs and Carl Hiaasen. Be sure to get a copy while supplies last.

One thought on “RE:View April’s Fool”