Matt Redman’s new record drops this Friday, 9/29. If the single, ‘Greatest Hallelujah’ is any indication, Redman’s latest release will be chock full of fresh powerhouse praise anthems. A singer/songwriter, Matt writes his own songs and is known for penning classic praise and worship songs like ‘The Heart of Worship’, ‘You Never Let Go’, ‘Blessed Be Your Name’, the Grammy-nominated ‘Our God‘, and the double-Grammy winning ‘10,000 Reasons ‘. Bet you didn’t know Christian artists were nominated for Grammys, did you? A full-time worship leader since age 20, Redman, now 43, hails from the United Kingdom. His latest single, ‘Greatest Hallelujah’ just came out this past Friday.

The first verse sounds like something straight out of the psalmist’s ancient songbook.

There’s a hallelujah, an everlasting song/A never-ending anthem, we sing to You alone/Resounding in the heavens and in our hearts today/How greatly we’re forgiven and how great/ How great will be Your praise.

My ears (and my heart) are certainly looking forward to hearing the rest of the new record Friday.

Last Friday, September 22, also saw the latest release from Christian singer/songwriter Matthew West entitled ‘All In’. The record has been in heavy rotation on my Spotify this past week and features a number of great songs. West’s new album is upbeat, up-tempo and uplifting. From the title cut, ‘All In,’ the record launches into a love story focusing on key relationships in West’s life, the foremost of which is his relationship with our Lord and Savior, Jesus Christ. Praise songs like ‘Mercy Is A Song,’ ‘Amen,’ and the bluesy ‘Jesus & You’ reveal the important role God plays in West’s life. Reflective songs like ‘Broken Things’ and ‘The Beautiful Things We Miss’ highlight West’s growing ability as a songwriter featuring thought-provoking lyrics laced with catchy melodies and backed by groovy rhythms. The love relationship theme unfolds throughout the record, including a walk down memory lane about Matt and his wife in ‘Something Greater’ and a tribute to his Mom, Lulu, in ‘Becoming Me’. Perhaps my favorite song is ‘POWER LOVE SOUND MIND’ which shares the stories of our hurts and heartaches and how trusting in God lifts us up from the ashes. The bluesy ‘Jesus & You,‘ runs a close second. Evoking ghosts of Steve Winwood, the song features a couple of cool organ riffs. All In’ is a solid work featuring well-written, theologically correct, rhythmic, soul-inspiring songs.

Speaking of which…Steve Winwood released a new Greatest Hits record at the beginning of September too. And a LIVE record no less! (I LOVE LIVE RECORDS!). if you haven’t heard it yet,  I urge you to go give it a listen. The record features live versions of ‘Dear Mr. Fantasy’, ‘Higher Love’, ‘Gimme Some Lovin’, ‘John Barleycorn’, ‘Roll With it’ ,‘Arc of a Diver’, and ‘While You See A Chance,’  to name a few. It’s a phenomenal live record that fully captures the sound of one of rock’s musical icons. The record is appropriately called ‘Winwood Greatest Hits Live’.

That’s  a sample of what’s been playing on my Spotify. How about you? What’s in heavy rotation on your music player?

Until next time—-may the peace beyond all understanding go with you wherever you go and may the wind always be at your back. 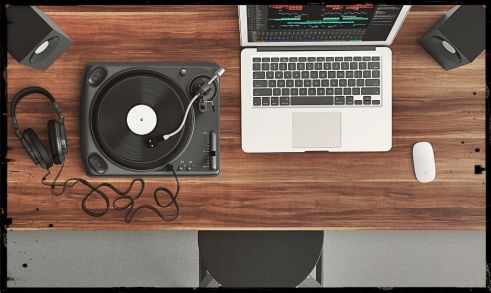