On Sunday night, August 30, 2015 Terri and I had the pleasure of catching the last of two showings of “Satisfried-The Musical” at the Palace Theatre in nearby Grapevine, Texas. The Palace Theatre is a renovated 1940s movie theater that plays host to a variety of events including showing old classic films on the first Friday of the month. The Theatre is located in the heart of historic downtown Grapevine at 300 S. Main Street.

Written and directed by multi-talented, local auteur Thomas King, Satisfried is a musical featuring the music of the late Andrae Crouch and telling the story of Satis Bell Armstrong, the struggling, self-made the Soul Food Kitchen. To make ends meet, Satis turns her business into a Jazz juke joint on the weekends to the virulent dissatisfaction of her preacher brother, the Reverend Otis Armstrong.

Satis, played by the incomparable powerhouse Ramona White, has to fend off her brother’s attempts to undermine her business. Ramona White has a powerful, soul voice to complement her talents as an actress. A veteran of many stage productions, including “The Queen of Soul”, “Crowns”, and “Seven Wives, One Man”, she does a marvelous job playing Satis. She brought a contagious energy to her role, engaging the audience and fueling her fellow cast members.  In addition to her work on stage, Ramona is one of the original members of  the local gospel sensation Kirk Franklin and The Family. 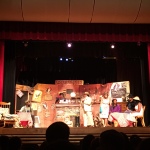 Actor, singer, and real-life minister Kevin Thornton, a Grammy nominated and recipient of American Music and Soul Train music awards, does an equally grand job of playing Satis’ brother. The tension between the two characters was readily felt by the audience and Kevin made it easy to root against him as the villain because he played his role so well.

Nicole Baughman, playing Annabelle Lee, adds life and a conundrum to the mix of characters, as she attempts to help Satis fight her ogre brother. A recent high school graduate, Nicole Baughman is well on her way to pursuing her dreams of working in the entertainment industry. Tambrin L. Johnson (Daisy) and Christopher Michael Randle (Jessie) round out the cast along with the Tam Sisters, played by Amber Parish Paul, Misty Edinbyrd, and Shrevia Garrett.

Fort Worth native Tambrin Johnson has a rich voice and is undoubtedly destined for great things.  Christopher Randle, who calls Arlington home, demonstrated great comedic timing and added a lot of humor to the production. The two characters played well off each other as Daisy had her hands full keeping Jessie in his place.

All the music is live and performed by the band Common Ground. The musical features such Crouch classics as “Satisfied”, “Through it All” and “It Ain’t No New Thing”, in addition to several others.

Thomas King has written several plays in recent years, in addition to authoring two books. He is a multi-talented artist who definitely got the most out of his cast and seemed to have a genuine joyousness that infected his production team. While “Satisfried” only had two shows in Grapevine, word is that there will be more to come in the near future in a theatre near you. If you get the chance, don’t miss out on getting your ticket. It is time well spent.

2 thoughts on “Review: Satisfried: The Musical”