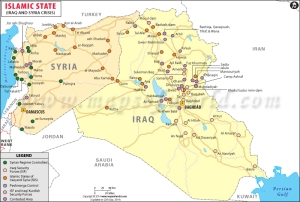 In recent days, we’ve heard a lot about the desire of ISIS to form a caliphate. What is a caliphate? It is an Islamic state led by a caliph, a man who considered to be the political and religious successor to the Islamic prophet Muhammad. The caliph’s power and authority is absolute. When he says jump, everybody else asks “How high?”

What you may not know is that ISIS has already declared that it has created a caliphate across parts of Syria and Iraq, with Raqqa serving as its de facto capital. They have called on all Muslims to swear allegiance to the newly formed caliphate. Caliphates adhere to strict Sharia law, discouraging women to leave the home unless absolutely necessary. They are never to leave home unaccompanied. There is no room for dissent, drugs, alcohol, or smoking. The punishment for stealing is amputation. According to reports out the region, ISIS has not only been beheading and burning people alive, but crucifying them as well.

The concept of a caliphate is not new. It’s beginnings can be traced back to Muhammad himself when he is thought to have named his cousin and son-in-law, Ali, as his spiritual and temporal successor. Sunni Muslims, one of the two remaining major factions of Islam (originally there were 3) believe that the caliph should be chosen and elected by community consensus. Accordingly, they consider Abu Bakr, Muhammad’s father-in-law, to be the first true caliph. Caliphates existed throughout Arabic-Islamic countries until the end of World War 1, when the Ottoman Empire collapsed and when the founder of the Republic of Turkey, Mustafa Kemal, abolished the caliphate system in Islam.

According to Graeme Wood, writer for the Atlantic Monthly, “Our ignorance of the Islamic State is in some ways understandable: It is a hermit kingdom; few have gone there and returned.” (Atlantic Monthly, March 2015)

The new caliphate formed on June 29, 2014 seeks nothing less than the restoration of the earliest model of caliphate set out by Muhammad over 1400 years ago. Under the caliphate, members police the streets ensuring men are bearded, women are dressed in accordance with Islamic Law, and businesses are closed during prayer times. Floggings and executions are a routine part of daily life, occurring in public view. Laws demand people only listen to official ISIS radio. Listening to music, smoking, or wearing hair gel are crimes punishable by flogging, amputation, or execution. Punishments for other crimes range from getting 80 lashes for consuming alcohol or committing slander to death by crucifixion if robbery and murder are committed simultaneously. Renouncing Islam results in death. Homosexuals are executed by being thrown to their death from the top of buildings. Jews and Christians are commanded to convert or be killed. Women can be married at the age of 9 and must be married by the time they turn 17. All women are expected to wear two black gowns masking their shape and cover their eyes with three veils.

The aim of this new caliphate is to spread until it rules over the entire globe. Who it does not kill, it seeks to enslave. Will we stand and fight or beg for mercy as they slaughter us–including everyone we love and everything we stand for— on our front lawns? No one likes war. But, just like one fateful December day in 1941, sometimes we have no other choice.

The Devotional Guy™ is a blog written by Rainer Bantau, an ambassador for Christ and a spiritual advocate for people seeking to grow in their relationships with God and their neighbors as they navigate the hills and valleys of life. View all posts by The Devotional Guy™