John Newton, the writer of the hymn “Amazing Grace,” was merely a young boy when his mother died. Seeing no other palatable options, Newton’s father, a sailor, took the young eleven-year-old boy out to sea with him. And thus, began the long winding road that would take young John Newton from conscript to deserter, to slave-trader, to redemption.

Legend has it that during a tumultuous, violent storm on the High Seas, Newton, overwhelmed with fear prayed for God to intervene and save him. As is the case for many of our stories, Newton faced sheer destruction, But God had a different plan. The story goes that from that moment Newton was a transformed man. He left the seaman’s life, got married, entered the ministry, serving as the Curate of Olney.

During his time in Olney, Newton befriended the poet William Cowper. Together they published a hymnal, “The Olney Hymns,” featuring, amid several other hymns, the song “Amazing Grace,” albeit under a different title than we know it by today. From its English roots, “Amazing Grace,” moved across the ocean to America, where it rapidly became part of the early Christian tapestry. It is a song of faith and redemption detailing a tale of transformation describing God’s unmerited favor upon His creation.

It is by God’s grace, we are saved, through our belief in Jesus Christ. “Amazing Grace” is the Christian response to the question uttered by King David, “Who Am I?”. For every Christian, upon coming to believe and trust in Christ as Lord and Savior, recognizes with sheer awe, the incredible gift of Grace, God, the majestic creator of everything in the Universe, bestows on us. We know we are unworthy and undeserving. We are aware that initially, before Christ, we only contributed our sin to the conversation between God and us. Nothing more, nothing less.

Being saved, we kneel in awe, asking “Who Am I?” 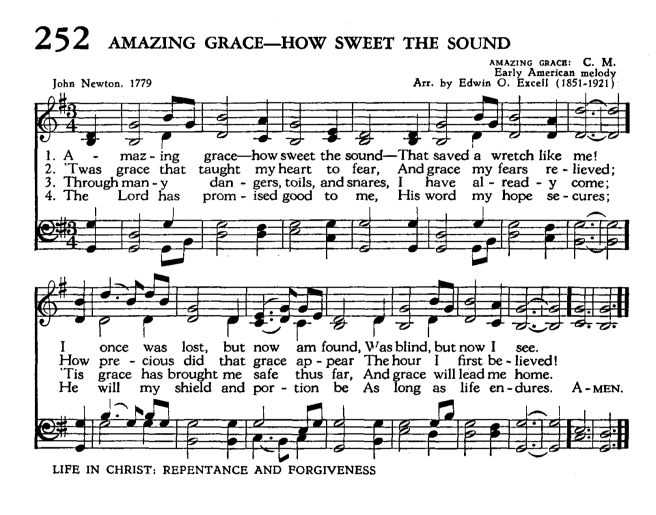 According to C.S. Lewis, Grace is what makes Christianity unique. Other faiths offer a means of getting even or making things right in the world. Except for Christianity, all other religions teach that there is something that needs to be attained or worked for in order obtain the favor of the Divine. Grace shatters the precept that you and I do anything to deserve the love God bestowed upon us of His own choosing. Before any of us reading this post were brought to life, God sent His Son to the Cross at Calvary, not as punishment, but as a path to restoration. Through the shed blood of Jesus Christ what was made wrong during the Fall, was made right for Eternity. It is because of this work, initiated by God, that through repentance, you and I find forgiveness.  Amazing Grace, indeed.