16 In all circumstances take up the shield of faith, with which you can extinguish all the flaming darts of the evil one; 17 and take the helmet of salvation, and the sword of the Spirit, which is the word of God, 18 praying at all times in the Spirit, with all prayer and supplication. To that end keep alert with all perseverance, making supplication for all the saints, 19 and also for me, that words may be given to me in opening my mouth boldly to proclaim the mystery of the gospel, 20 for which I am an ambassador in chains, that I may declare it boldly, as I ought to speak.

A seasoned ministry co-laborer I know fondly points out that ministry is filled with peaks and valleys, or high-highs and low-lows as he calls them. During the highs, it’s important we don’t lose sight, as Lucifer did, of who the ultimate leader is—God. In the same vain, we must learn not to take attacks and opposition personally when we face them while we are attempting to minister to a lost and fallen world. Although this can be challenging, in the midst of battle I have to remind myself “It’s not about me. It comes with the territory. I’m in a battle.”

In times of war, soldiers get shot at. When it happens, they don’t mope around with hurt feelings. No, soldiers don’t take it personally because they know it is part of combat. They expect to get shot at.

In my brief time working in ministry, I have found that a few people have a grandiose misconception of what ministry is all about. Perhaps they’ve heard one too many “learn to live the good life” messages on TV from one of those preachers with perfect hair and pretty teeth. Ministry is far from glamourous—at least by worldly standards. It is absolute splendor by eternal measures. Yet, while here on Planet Earth, ministry is not only hard work—it’s a constant battle between things seen and unseen, between good and evil, and between happiness and sorrow.

At times,  it seems every celebration of life is always followed by mourning a loss. One day we are  getting ready to go to a wedding only to find ourselves, mere days later, preparing to attend a funeral. Prayer is what helps us make it through this difficult and challenging journey. 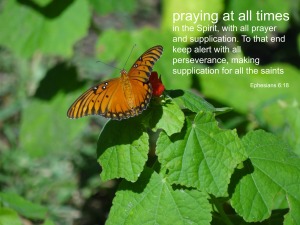 Throughout his many letters found in Scripture, the Apostle Paul repeatedly teaches us that prayer is one of the greatest tools in our arsenal. He instructs us to us it.

Paul exhorts us to pray all kinds of prayers on all occasions, with all perseverance and for all the saints.

In other words, we are to pray until the cows come home and afterwards keep on praying. It’s not just a matter of praying at certain designated times, but living a lifestyle of prayer. Pray until praying becomes a natural extension of your everyday being. Listen prayerfully. Speak prayerfully. Take action prayerfully. Do all things, prayerfully.

Since humans first started to call on the name of the Lord, (Genesis 4:26), God has transformed thousands upon thousands of lives and overcome many grave situations because someone was faithful enough to pray. God delights in hearing our prayers and answering them. True, He doesn’t always answer when and how we would like, but He does respond perfectly in His way and in His time. Scripture tells us repeatedly that if we, as believers, call on Him, He is faithful to respond.

When we are faced with adversity, rather than taking it personally, we must depend on prayer to give us the boldness and discernment to combat the evil that assails us. I’ve seen the prayer of righteous men and women yield incredible results.

On our journey of faith, we will encounter seasons of prosperity and adversity, victory and defeat. Paul, thankfully, reminds us to pray continually in the midst of all occasions. I believe this is God’s divine direction to us in order that we may endure the battles we face in this life so that we can celebrate in His presence in the life to come.

Press on. Keep the faith.