Today is Palm Sunday, the day that we begin our commemoration of what would be Jesus’ last week on Earth culminating in his death on the cross on Friday and celebrating his resurrection from death on Easter Sunday. It is a week of joy, hope, and love mixed with tears, pain, and sorrow. You see, Jesus suffered before he was glorified. It is a week of low lows and high highs. We see Jesus enter Jerusalem humbly on the back of a donkey. Yes, that’s right-the Son of God rode into town on a donkey. The King of Kings didn’t pull up in a parade of limos or with the media fanfare to which we have grown accustomed. He didn’t arrive making promises that he could not keep. He didn’t have any clever slogans like “Make Israel Great Again”–which is really what the people wanted. They wanted a human king to deliver them back to greatness. But God had other plans. God’s plans are always greater than our own. God knew that Israel and the World had bigger problems-mainly being separated from their Creator, their Jehovah Jirah, the Great I Am. Through his son, Jesus Christ, God took the initiative to begin solving the problem the people faced. By his life, Jesus accomplished what only he alone could do–live a perfect, sinless life so that in death, Christ could offer himself up as the unblemished, perfect sacrifice for all humanity. Through his death, we received life. 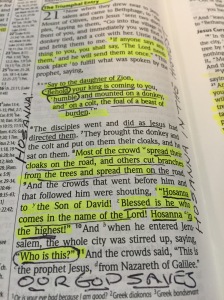 Today is a day to celebrate what back then was yet to come. Today marks a day that reminds us of what we have yet to look forward to–the return of Jesus Christ, our King, our Lord, our Savior.

As Christians, we worship a God who saves. Yes, our God saves. That’s what separates him from all other would-be gods. God Almighty alone has the power and ability to rescue us from death and desolation.

If you haven’t done so yet, let me encourage you to make today the first day of your new beginning by placing your trust and faith in Jesus Christ so that when you enter the gates of Heaven you too will hear the Angels and whole heavenly host rejoice with triumphant joy.

If you’ve already done so, but find yourself tired and weary, let me encourage you. You are not alone. You belong to the family of God. Nothing can separate you from God’s grasp. He has you firmly in his hands. Dust yourself off and begin anew.

Make today the first day of the rest of your life.

1 Now when they drew near to Jerusalem and came to Bethphage, to the Mount of Olives, then Jesus sent two disciples, 2 saying to them, Go into the village in front of you, and immediately you will find a donkey tied, and a colt with her. Untie them and bring them to me. 3 If anyone says anything to you, you shall say, The Lord needs them, and he will send them at once. 4 This took place to fulfill what was spoken by the prophet, saying,

5 Say to the daughter of Zion,
Behold, your king is coming to you,
humble, and mounted on a donkey,
and on a colt, the foal of a beast of burden.

6 The disciples went and did as Jesus had directed them. 7 They brought the donkey and the colt and put on them their cloaks, and he sat on them. 8 Most of the crowd spread their cloaks on the road, and others cut branches from the trees and spread them on the road. 9 And the crowds that went before him and that followed him were shouting, Hosanna to the Son of David! Blessed is he who comes in the name of the Lord! Hosanna in the highest! 10 And when he entered Jerusalem, the whole city was stirred up, saying, Who is this? 11 And the crowds said, This is the prophet Jesus, from Nazareth of Galilee.